As always I take the pictures and Britt did the write up on the battle. Although the camera battery went flat by turn three and so there are no shots from turn four
Forces: I fielded the same 4000 points that I did in our last game and my fight with James (a.k.a. Lord Nurgle). Bikes,2  Land speeders, 3 Tacs,2  Assaults, 4 Warhounds, 2 Devs, & a unit of Landraiders. Greg had a smaller force but his infantry were in Razorbacks, several units of Predators, Devs, and two Reaver Titans. And I thought just one of ‘em was bad news :-) Turn 1 saw me capture the central town and the hills on my left. Greg seized the hills on the right and the woods near the town. Turn 2 had me trying to take out his Predators & Razorback infantry on my left. My Land speeders did good work, but Greg wiped them out in a counterstrike and proceeded to kill on of my supporting Warhounds there and rout another. My position in the town was never seriously threatened, and I killed some Predators that tried, but soon I had problems here as well. Those %$#!@@! Reavers were “unkind” to my infantry & Devs, pretty much taking them out. They then, with the help of Desestators, took out both my Warhounds in the centre turn 3.
Things were looking better on my right. I had retaken the VP hill area there with Landraiders & Bikes, and was making my way to contest his entry point VP area, but ran out of time. Great game and lots of fun. The only Victory Point went to Greg for his “Break their Spirit” as he destroyed one unit of my Warhound Titans. He almost killed the other one as well. Victory to Greg, and he certainly earned it. 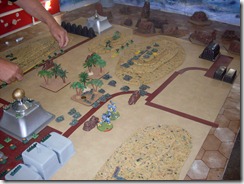 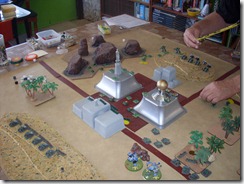 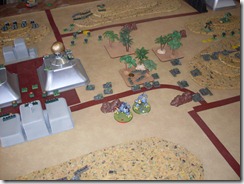 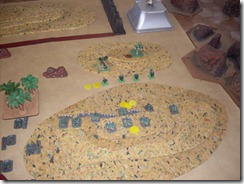 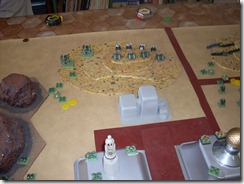 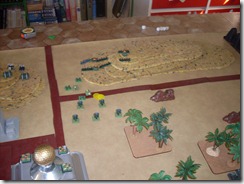 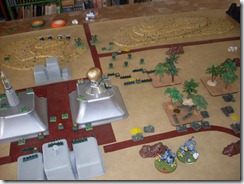 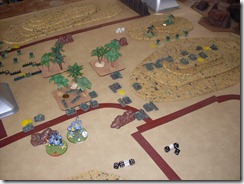 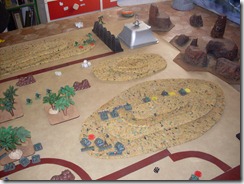 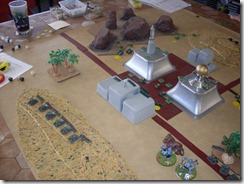 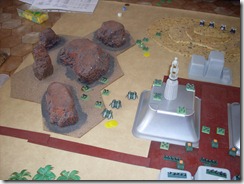