Well again it has been a while since i have updated the blog. Its only a short one. I would have taken more pictures, but forgot i had my camera was in the bag.

we got down to two games of Battletech. These were hurriedly thrown together and terrain set up. See photo. In both Greg's Whitworth and JagerMech faced my Atlas & Hunchback. While both were fun games, Greg was seriously at a disadvantage since he only had 105 tons vs. my 150. Oh well, he almost won the first game anyway. In the picture above you see that he's already destroyed my Hunchback(too many head-shots!!!) and his Jagermech is doing a "death from above" on my Atlas. While the Atlas eventually won, it was a near run thing. A similar result in the second game. Next Monday we'll try again, but with this time having an equal 200 tons per side. 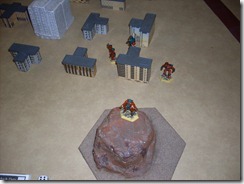 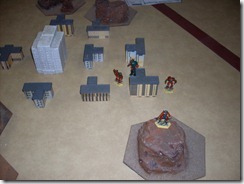 Well that's it, short and sweet. the postman has turned up with my land forces for Dystopian wars