Ok so this my third game at Briscon17 and It was 3000 point per side and it was between Necron Sautekh Legion (Developmental V1.1) and CODEX ASTARTES …

Ok sorry not many in game shots and army shots don't much the board we played on, in most cases.. 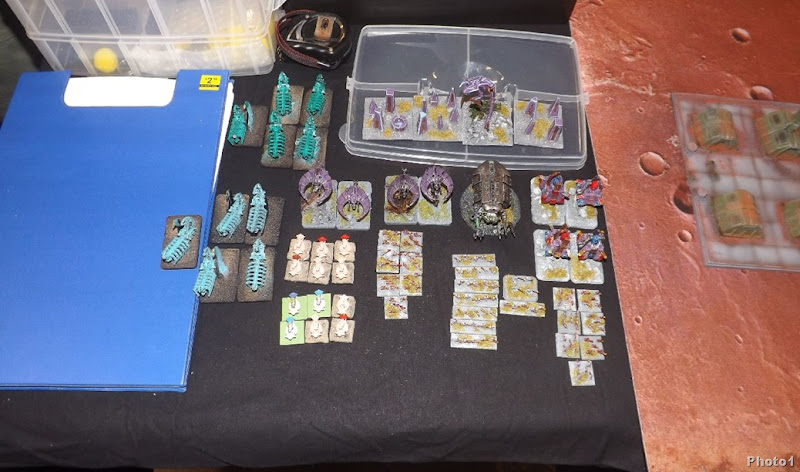 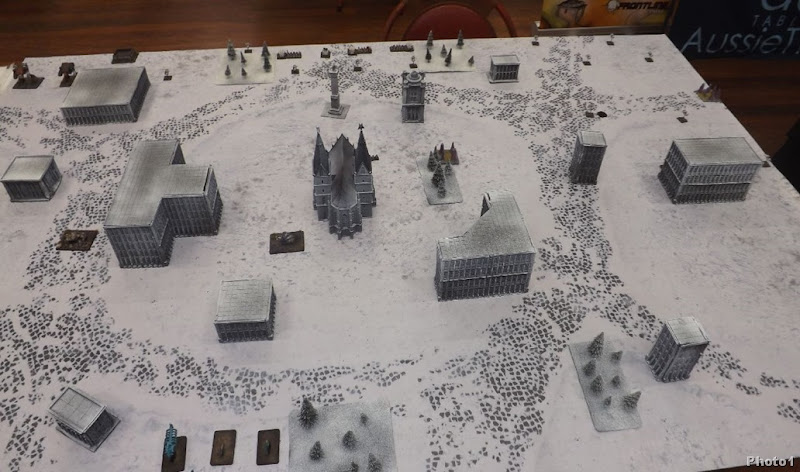 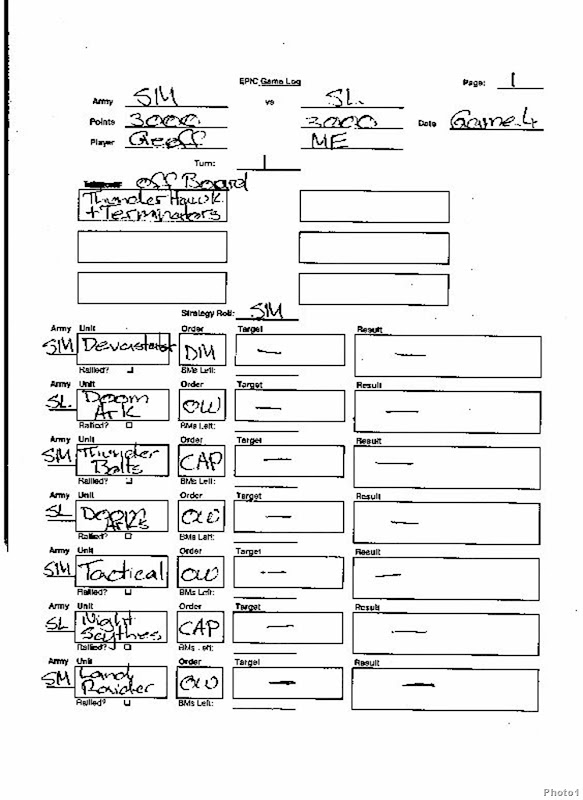 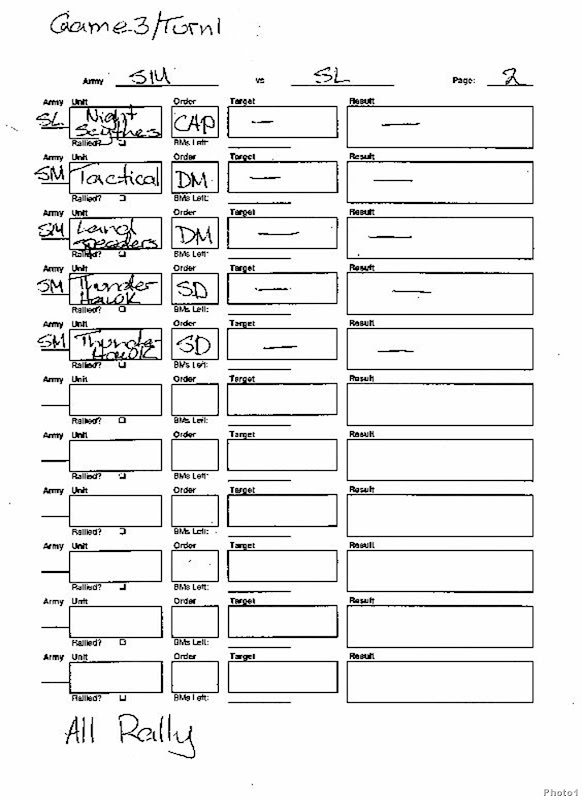 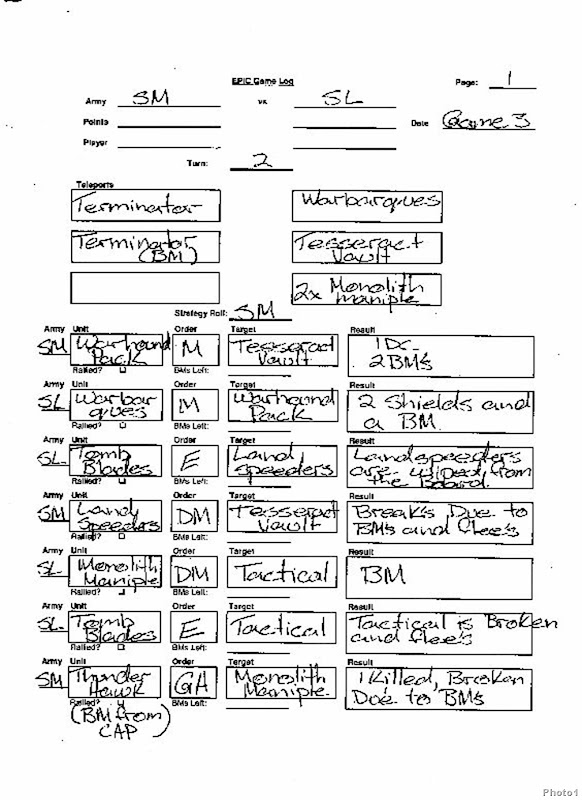 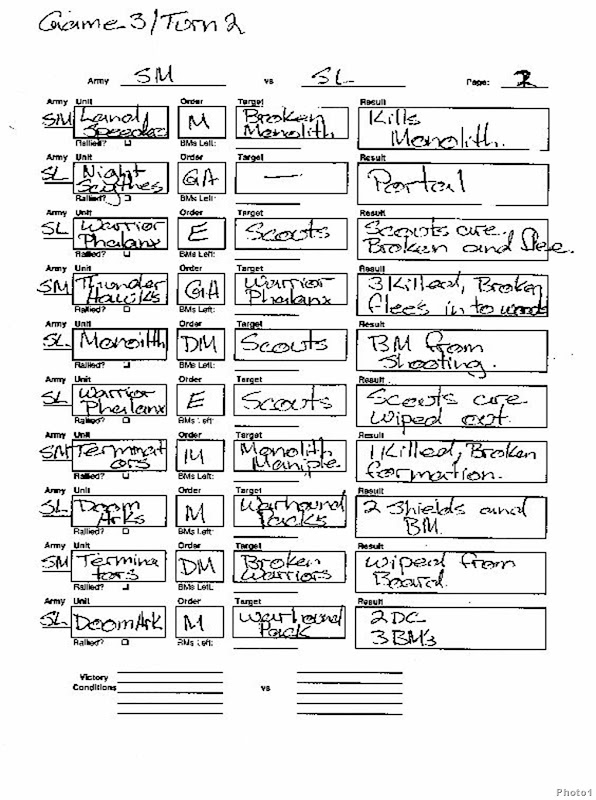 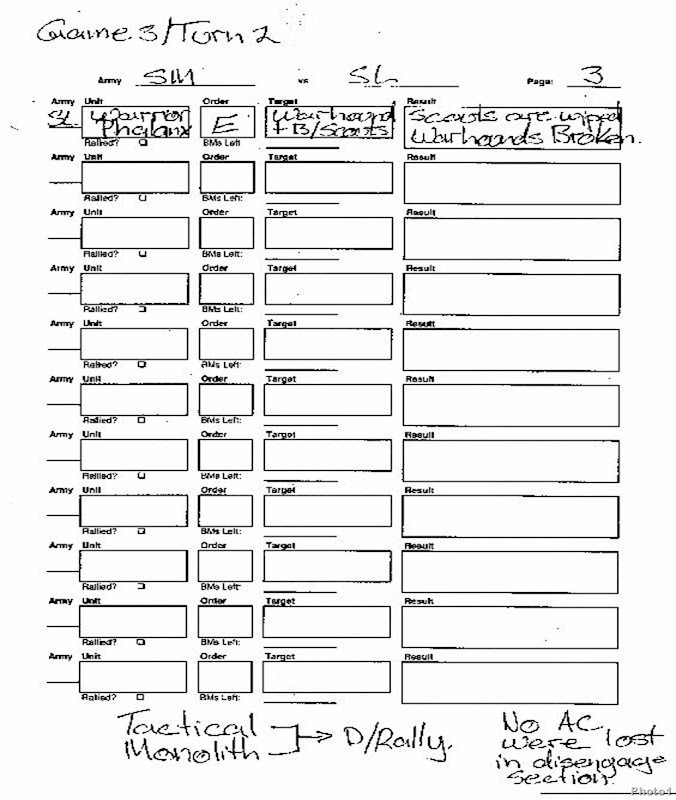 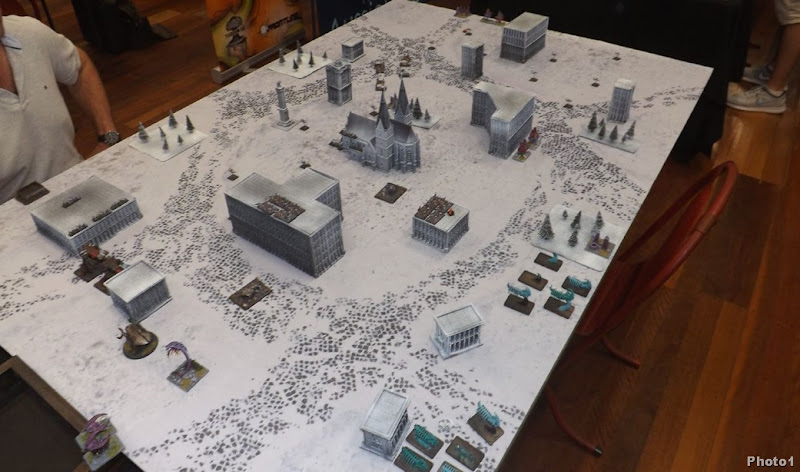 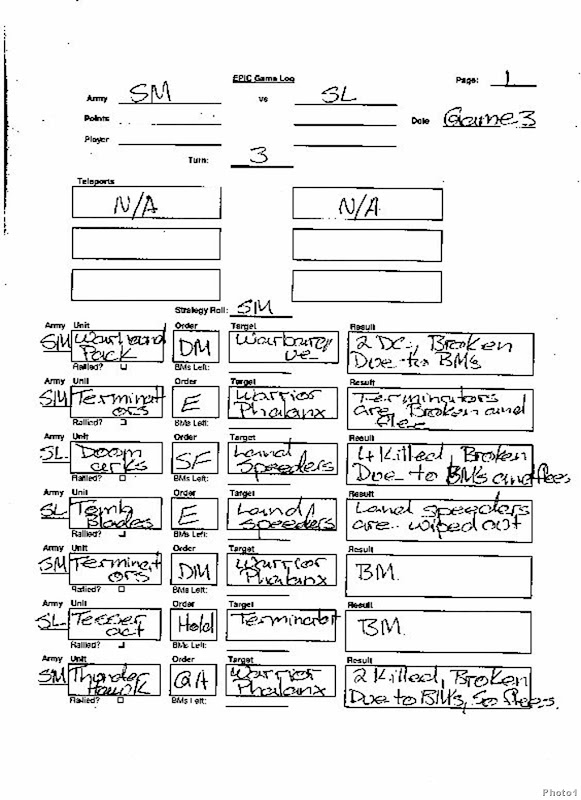 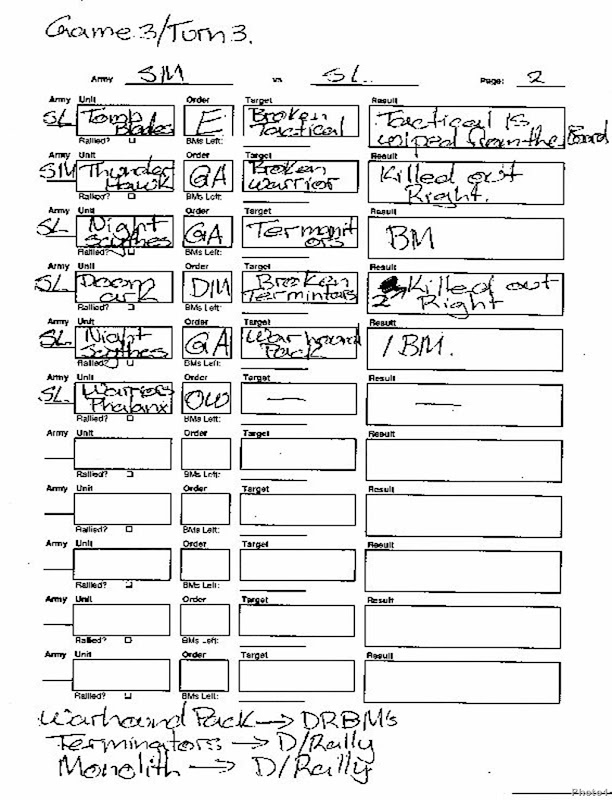 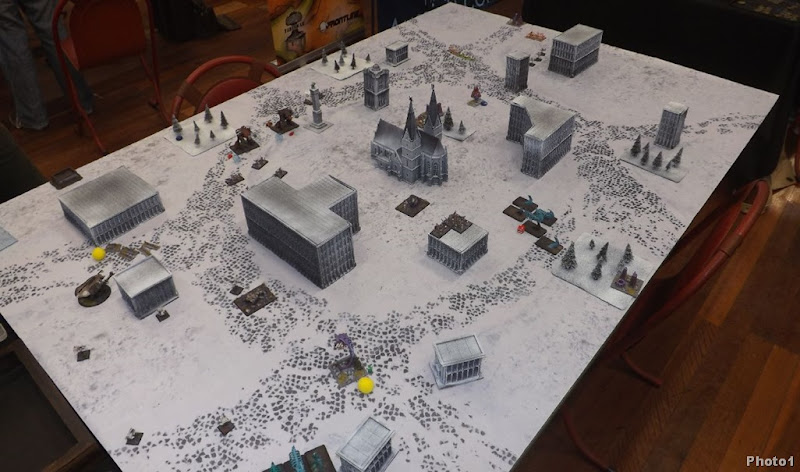 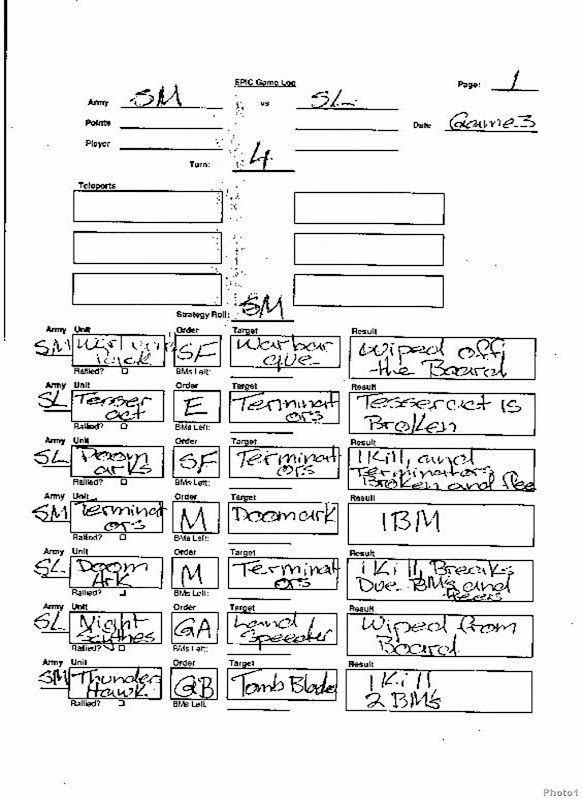 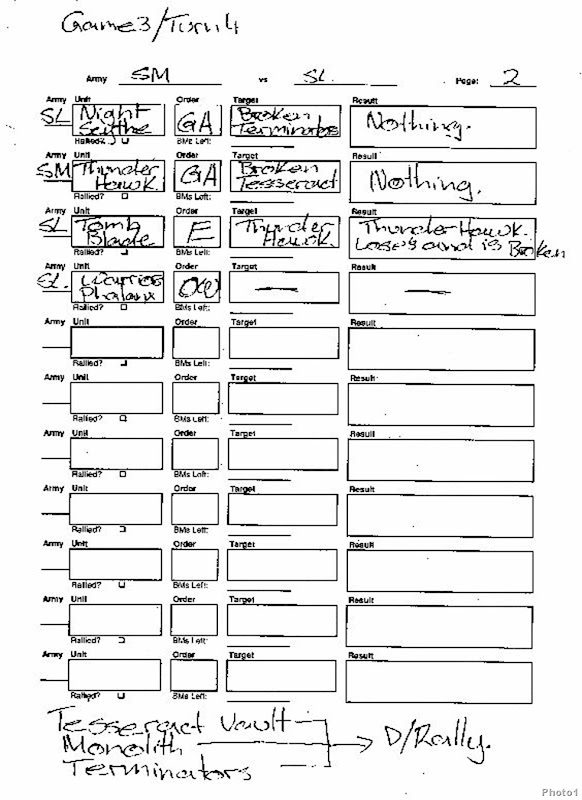 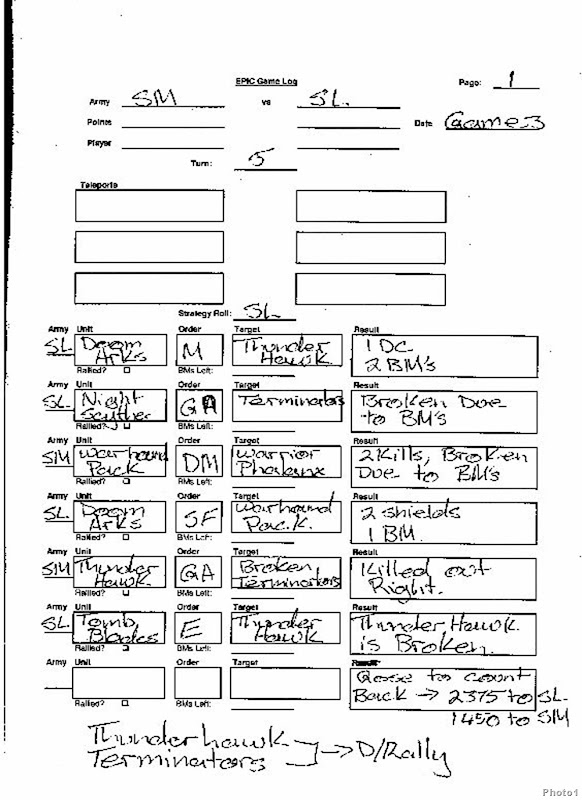 Summary
Oh yeah…Wow, in all my time test armies I have never gone to a turn 5 in Epic A…The game was see-saw, just when I think I was getting in front,he would find way to contest or break something to stuff my plans up…
I was trying to work a flank and move down it and clear out formations as I went, it kind of worked, in that pulled formations to that flank. The big thing in some cases was dice rolling, I would roll 12 dice and get 1 hit, john would or wouldn't make the armour save and then John would roll low on the resolution and I would either roll well or just beat him..So yeah I would love rematch of this game against john again..at some point in the far off distance future….
So thanks John for the fun and interesting game..
Tomb blades did their job again, fine that using the portal on the Monoliths or Night scythes a big boost to them..If you choose the right target too, they general can win their combat..if not, then it not to much of points sink if you don’t
Feed back from Joh…..

This seemed to be a fair and balanced list.

2…..Would you change the costs of any units?

3….Did this list appear substantially better than the primary army of its 40K race, or simply a different spin on the army? Was it clear that the test list had weaknesses to offset strengths, and vice versa?

4….Did this list play like a one-trick-pony (all air assault, all amour, all CC etc)… If yes, was that thematically accurate to the army's background?

5….On a scale of 1 to 10, how happy would you be to see this become and official army list?

Ok sorry not many in game shots and army shots don't much the board we played on, min most cases.. 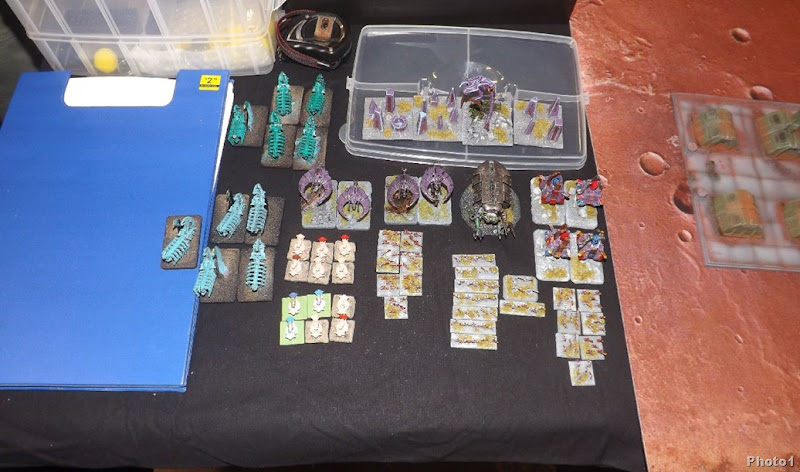 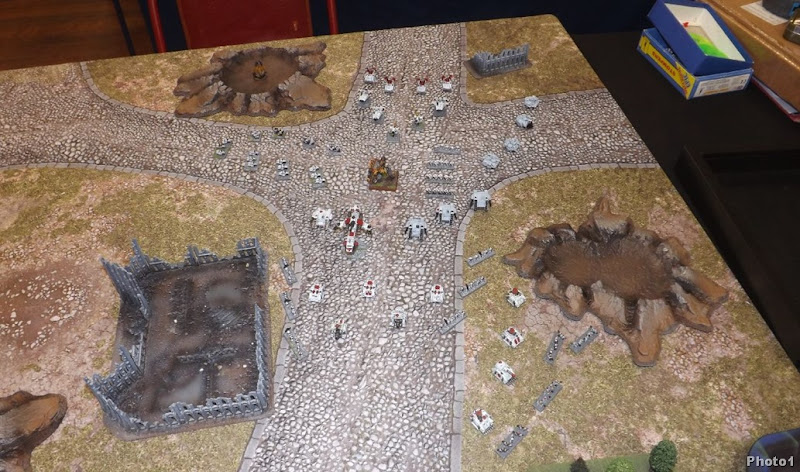 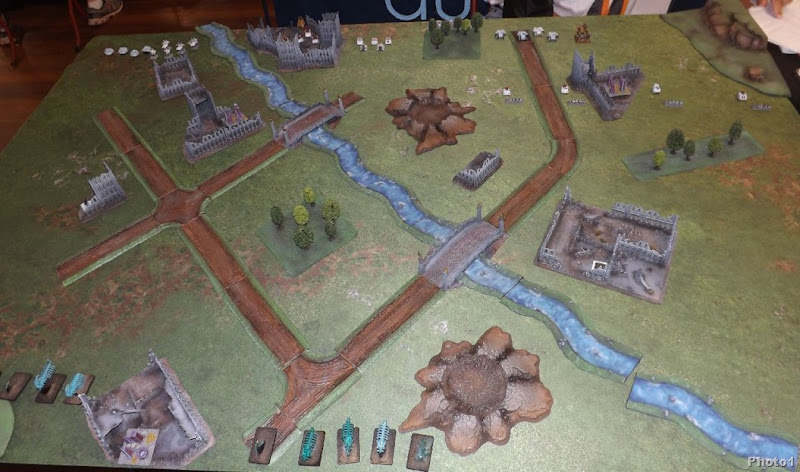 I basically deployed the two formation of Doom arks as shown,not to far from my blitz..The plan was to wait and let the marines spread out, before bringing in the rest of the force in..but the Night scythes, would allow me to deploy two formations if opportunities arise… 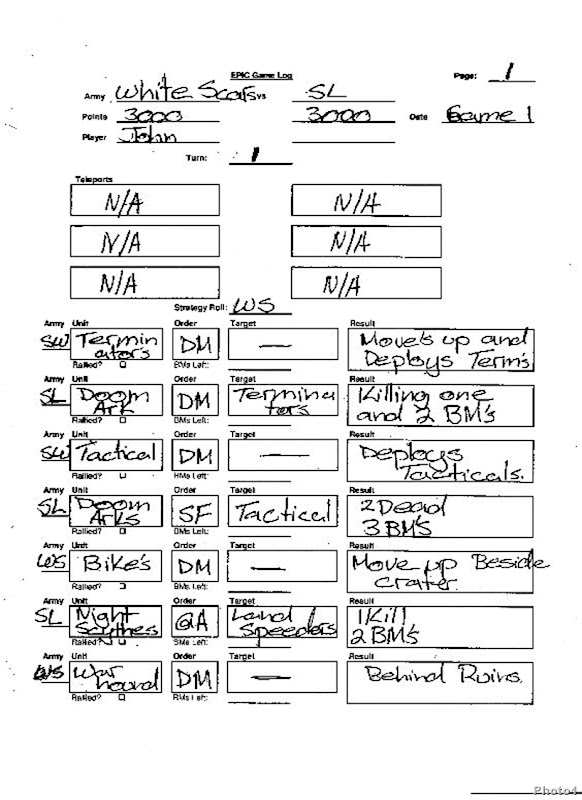 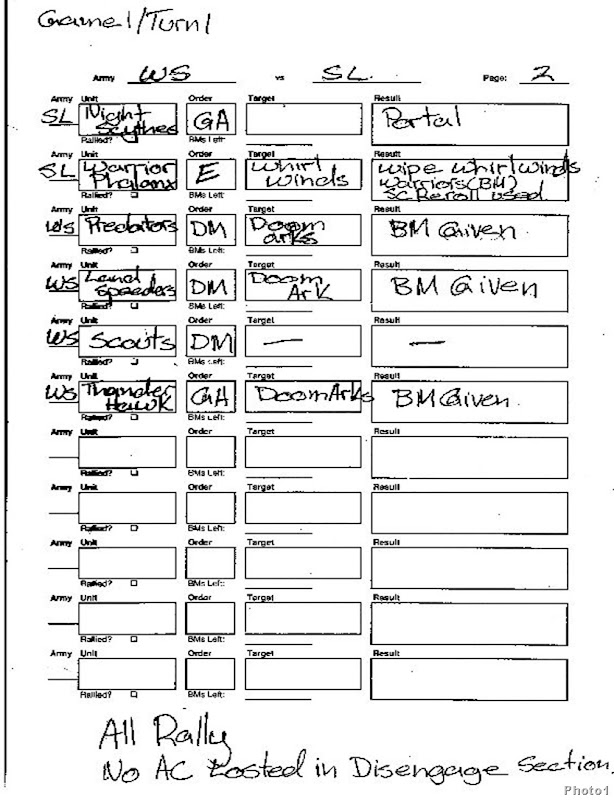 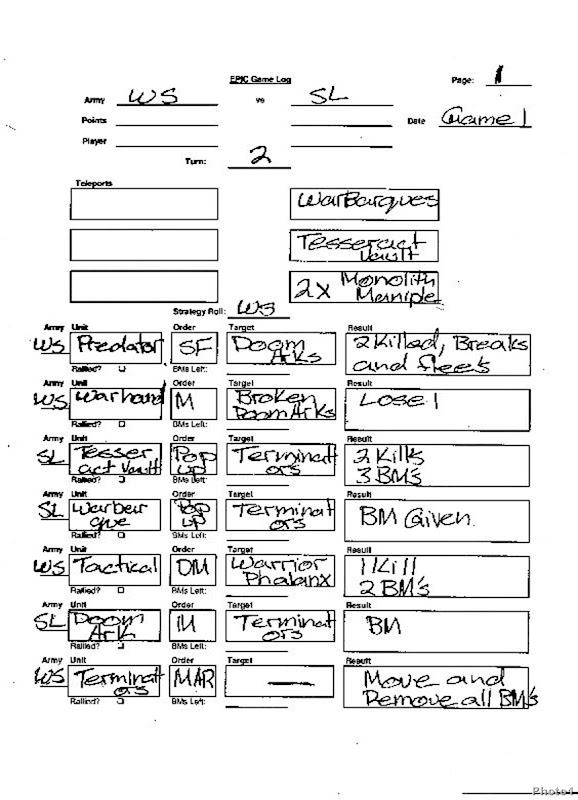 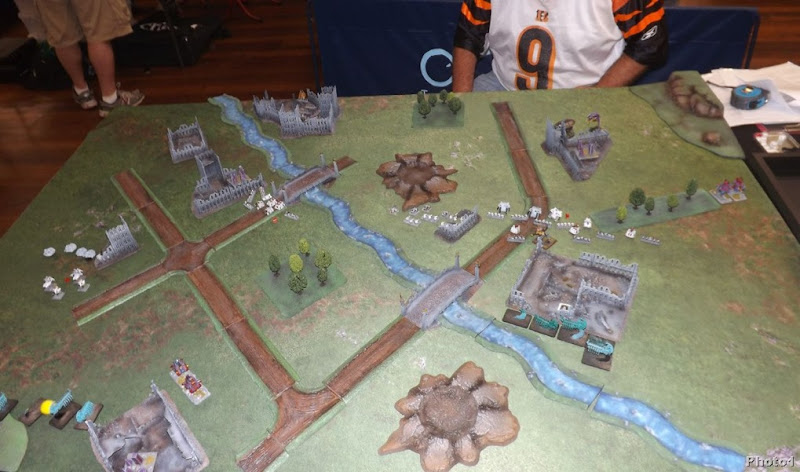 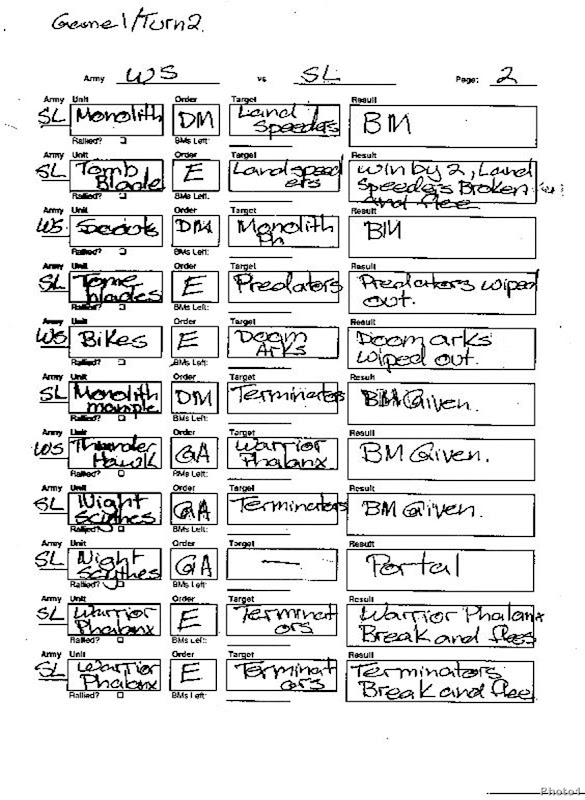 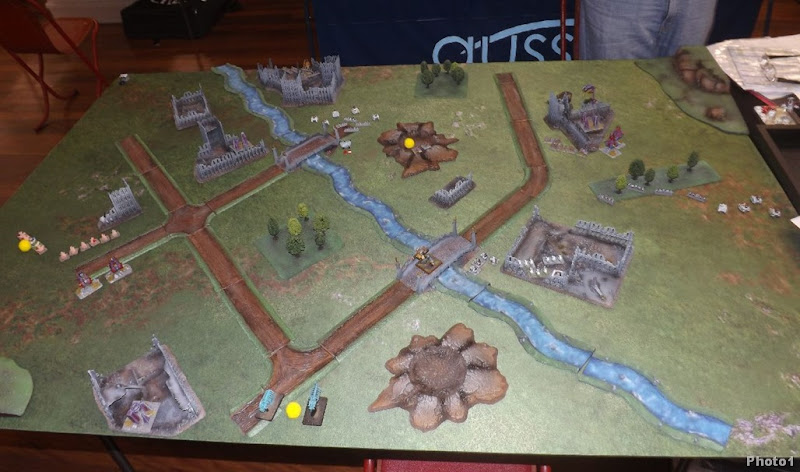 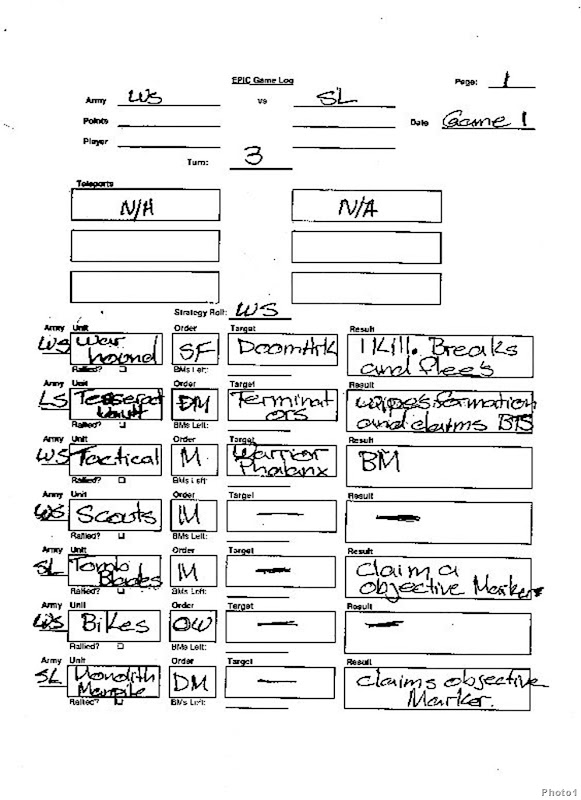 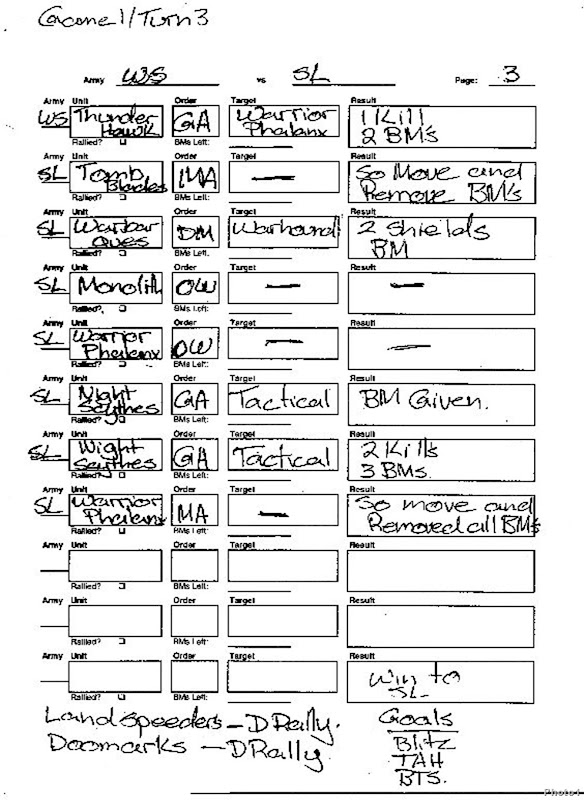 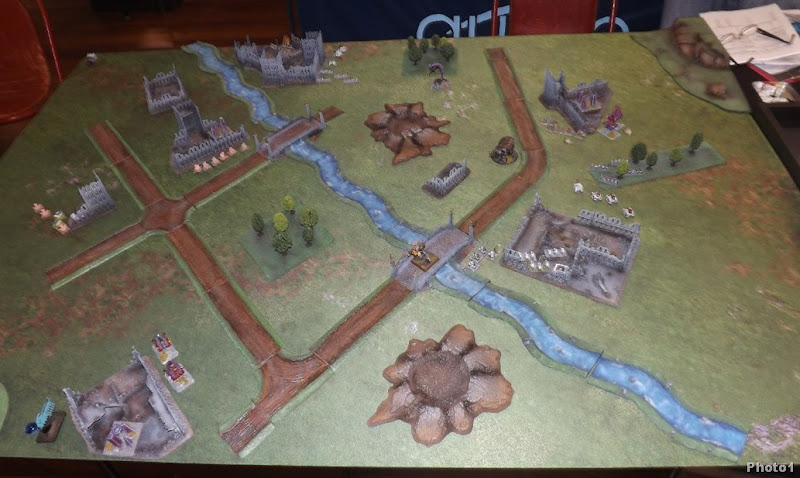 Summary
Yeah, pretty fun game and a interesting one, john had played epic before, but it had been a while since he play a game.Since there was no AA or airpower, the night scythes had pretty much free range over the board and this help in that I could target his Whirlwind formation, before he could use it. Since I didn't want my infantry ducking for cover in the later turns from artillery fire…Once that was gone, it made life easier in the later turns and allow me to move out in the open, without the fear of artillery bombardment.
TESSERACT VAULT manage to kill the BTS with it TK shots, but only just manage to get one hit, but that was enough..
Tomb blades eared their keep and did quite well in this game..
Feed back from John.. 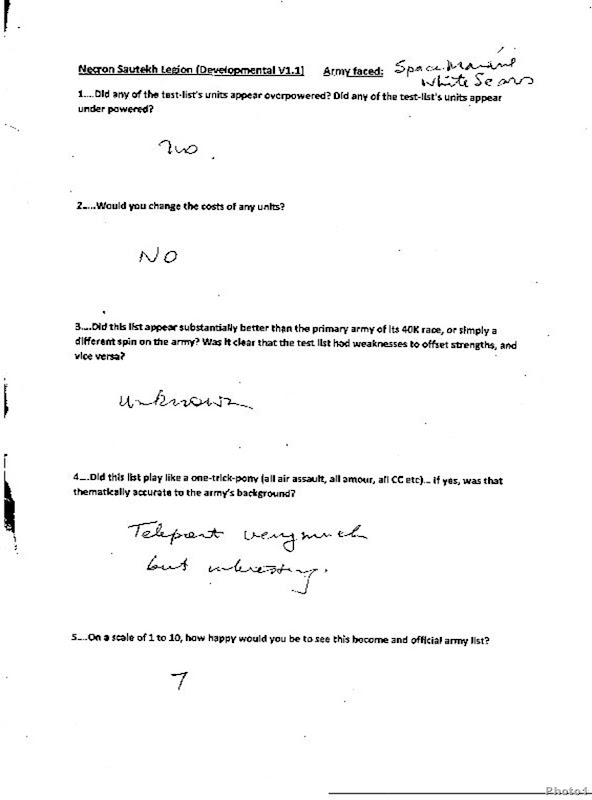