On the 4th, we played a game of Crusader and I took the pictures and Britt wrote the report(thanks Britt).

Greg came over about 12:30PM for our weekly game. Today it would be 28mm Ancients using the “Crusader” rules & his nicely painted up 28mm hard plastic Romans and Celts. An innovation this week was the introduction of 2 units of Cavalry to both sides in our Roman Civil War. Terrain was all about…mainly low hills…but the only bits that affected the battle were the town near the centre and its adjacent orchard and a steep hill on Greg’s left that he kept evading his light infantry into.

Things started off as usual…Greg threw ‘snake eyes’ for initiative, and the battle was on. I had my cavalry on both flanks, which soon died after several unsuccessful attacks on Auxiliaries & a Legion (horses are hard to keep controlled). This also kept my main army from moving much as this caused me to loose the initiative. Greg’s cavalry attacks were more successful, and even wiped out my ‘Green” legion before both died. With all cavalry dead, we could now start the battle!

“Who are you, and what have you done with Greg?” One of the many joys of playing with Greg is that his luck is as bad as mine, usually. So what was going on? He was rolling 6’s on a D6 like that’s all they had, and three 0’s on 3 D10???? What the h@#@! ?  He explained that these were his normal D&D rolls, and since he hadn’t played last night, they were coming out here. Actually, by game end, he was only a bit ahead luck-wise….but it just wasn’t Greg!

On went my Legions of Terror! We got held up in the town when his lights forced back mine. I sent in my Heavies for support, but with the death of my rightmost legion and the temporary retreat of his lights, this strategy had to be abandoned. The death of my General as we fought an opposing legion didn’t exactly help matters.

In the end I was down to but one Legion. It tried to cut its way out, but was instead surrounded. Desperate men fought valiantly, but soon the Standard wavered and then fell. All was lost.

Great game Greg. Thanks for getting all the minis & rules as well as the organization done….and for being a fun opponent as well. We’ll be at “Crusader” next Sunday. Anyone who’d like to join in is more than welcome. 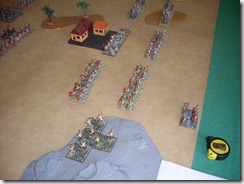 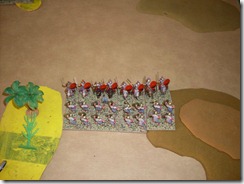 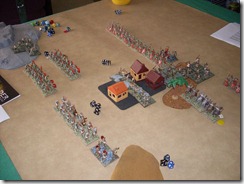 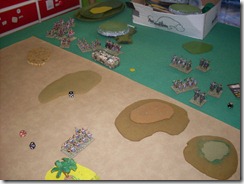 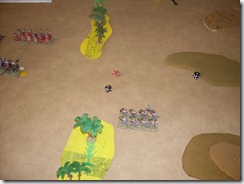 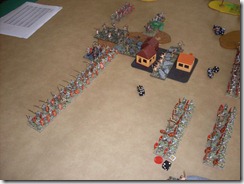 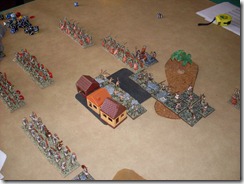 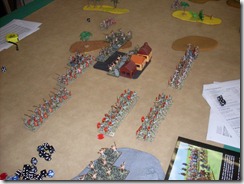 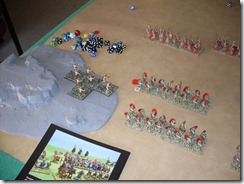 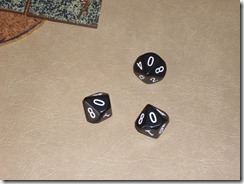 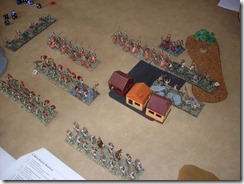 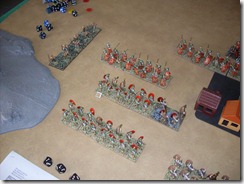 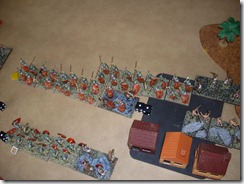 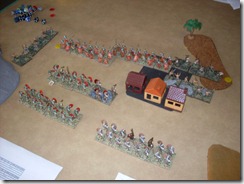 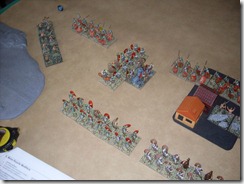 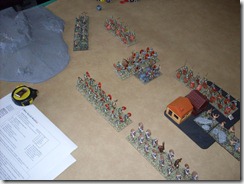 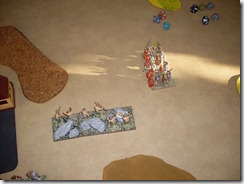 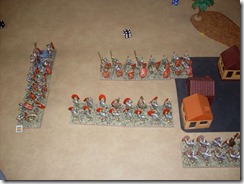 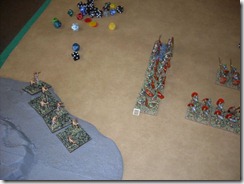 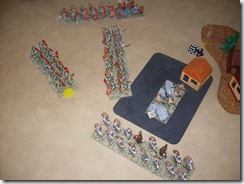 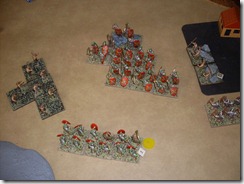 ENJOY AND HOPE THE DICE ROLL HIGH FOR YOU.