On the 20th, we played a game of Crusader and I took the pictures and Britt wrote the report(thanks Britt).

Greg arrived today at about 1PM, bearing a new set of rules to try (Crusader) as well as his beautifully painted 28mm hard plastic Romans that you’ve probably seen pictures of on his blog. I had set up some terrain ( a line of woods on my left flank, a few hills near our table edges) which played little part in this Roman Civil War battle. We had identical forces. I placed my 2 Veteran Legions in a deep formation in my centre with 2 Skirmisher units in front of them. To my left were my Green Legion and my right held the Auxiliaries. Greg’s (Pompey’s) force was deployed in a thinner line, overlapping me on both flanks. The forces were about the same, but his skirmishers were placed on either flank…a major concern to me throughout the game.

The game was mainly to learn the rules and have a bit of fun. Both sides moved forward, and those flanking Skirmishers of Pompey began to remind me of Cannae . My skirmishers managed to kill a base of Legionnaires in the centre, leaving them shaken. Greg’s Auxiliaries attack my Green Legion, but it routs them. My skirmishers fire, then retire behind my Veteran Legions who then charge their opposite numbers. My deeper formations win the day (but we later learn I should have been using fewer dice). My Green Legion pursues Pompey’s Auxiliaries. The enemy Skirmishers are now even with both my flanks. A cause for concern! Pompey’s charge on my left Veteran Legion, comes to naught, and it routs back.

But then things started to fall apart. My Veteran Legions attacked his shaken one, but he not only held, he threw me back Shaken as well. Pompey then makes a drive on my right with his Legion pushing back my Auxiliaries and his skirmishers inflicting missile casualties on them. Repeated attacks in the centre failed to budge Pompey’s Legions, but finally one died and then his Auxiliaries. Luck (or my tactical dice rolling skill?), saved my Auxiliaries but I lost a Legion. The two Skirmishers now shot it out, and Pompey’s loss here caused that Great General to call it a day. Caesar should be back in Rome in time for the “Ides of March”! My friend Brutus says he has a surprise for me.

This was an excellent learning game and many thanks to Greg for buying and learning all the Crusader rules as well as teaching them to me. Those 28mm Roman minis were a nice aspect of the game. Very easy on the eyes! Next Sunday we should be doing another Crusader game, this time with some Cavalry.

The pictures below are in no order, I wish I had taken more. 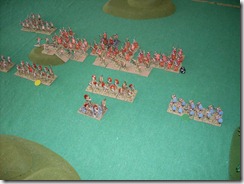 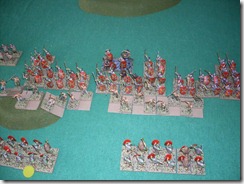 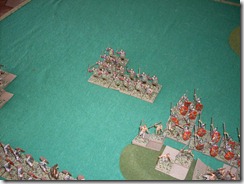 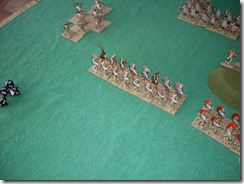 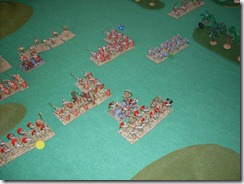 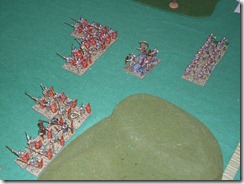 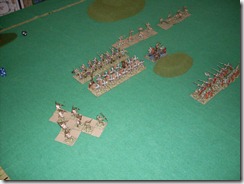 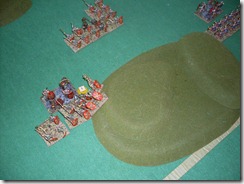 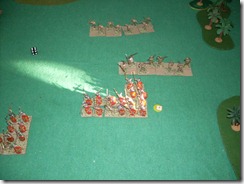 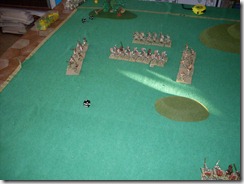 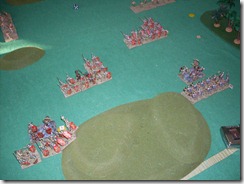 Any ways, may the dice roll high for you.